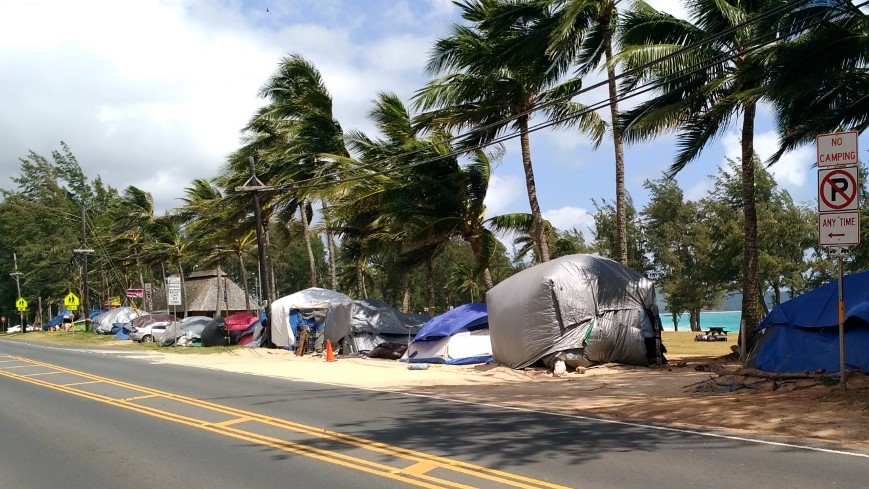 NOT IN OUR NEIGHBORHOOD!!!

The affordable housing and homeless crisis had become an unresolved and growing festering sore in Hawaii already before the Covid-19 pandemic, and will likely explode further as rent subsidies and employment for the most-in-need dries up further. While it was hoped that people would become more compassionate during the pandemic, we seem to be back to old norms. Proposed short-term-gap measures or even long-term solutions proposed, whether in Kailua, Kaka`ako, Waikiki, or anywhere else, are often met with the old outcry “Not IN OUR NEIGHBORHOOD” by often misguided local community activists.

So, in Waimanalo, a group of dedicated out-of-the-box thinking persons started to construct a village for local homeless on DLNR land that they hoped to lease, gathering the most-in-need and sick living along the highway in tents at Waimanalo Beach Park and surrounding bushes everywhere inclusive of “Sherwood Forest.” Unfortunately, their limited village site is located in a flood and tsunami evacuation zone whose issues, among other concerns, have not been resolved.

But why did it have to come to that? Well, the price of Real Estate along with Real Estate speculation, as largely seen throughout Hawaii, increased astronomically over the last 15 years with the seemingly sole focus on the Tourist Industry, so that even just a simple three-bedroom home cannot be purchased under $700,000 even in Waimanalo. With no “Living Wage” in sight for Hawaii, which totally depends on the Tourist and Military Industry with attractive but high-priced homes largely built for overseas investors, people failing to pay the rent will end up on the streets. And once on the street, how long will it take for one to physically and mentally deteriorate? So, the solution for many was to either move to the Big Island or leave Hawaii while they still had coins in their pockets, or become homeless.

Yes, there are common-sense solutions but we have to think fast, “Out-of-the-Box,” and act quickly. One such solution to solve the homeless crisis in greater Waimanalo and surrounding communities lies on our doorstep.

Option 1 would be composed of a two-story apartment complex with a minimum of 448 units (studio, one- and two-bedrooms) that can readily accommodate almost 2,000 residents.

Option 2 would be composed of a three-story apartment complex with a minimum of 672 units (studio, one- and two-bedrooms) that can readily accommodate almost 3,000 residents, but would require a height variance from the permitted height of 25 feet to no more than 28 feet.

Situated along Kalanianaole Highway. and not directly adjacent to the ocean, expected sea level rise due to Global Warming is mitigated and structures are also not located within a 100-year flood zone. A partially self-sustainable farming opportunity for its residents is incorporated with 300 each 10′ x 10′ garden plots, as well as an urban forest composed of over 40 mango trees that screens the development from Kalanianaole Highway and takes advantage of the layer of fertile Mokule`ia Loam that is present there and approximates the downslope boundary of the 100-year flood zone.

As already recommended in the 2011 Waimanalo Regional Plan and initially scheduled for construction funding in 2015 by the State Department of Transportation (DOT), replacement of the nearby single-cell culvert Inoaÿole Stream Bridge structure with a multi-cell culvert bridge structure remains a top priority. It would further reduce potential flooding in the area and would also remove uphill parcels out of the 100-year flood zone, thereby increasing the opportunity for further such development. The proposed Inoaÿole Stream Bridge project also includes improvements to roadway approaches, a possible detour road, and utility relocations. State DOT assessed a detour road option through Bellows Air Force Base, and submitted a draft environmental assessment with design in 2009.

With the 2012 Waimanalo Beach Plan Final EA as an initial road map and “Out-of-the-Box” thinking by State and County agencies, such an affordable housing center/village could be readily established here that would solve the local affordable housing and homes crisis.. People forced to temporarily live in tsunami evacuation zones, hiding in Sherwood Forest, in bushes everywhere, clinging to their tents along the State Highway out of the “forbidden Zone” of the City and County of Honolulu-owned Waimanalo Beach Park, could then perhaps again live and die as human beings unless the community wants to deny these people to live near and enjoy the beach. Do we all care? We will see. And we must remember that they are not only former Waimanalo residents. They have also congregated here from throughout the islands and are forced to hide while the Tourist Industry is trying to further expand its footprint here. Enacting more laws to force them “out of sight” of the tourists is not a humane solution.

While the Waimanalo solution cannot be applied so easily everywhere else, we must acknowledge that the stumbling blocks are actually us. Political rhetoric instead of moral leadership resolves nothing and just makes long-term situations worse. If we open up our minds and hearts now, we can not only stem but eradicate the homeless crisis that we ourselves have largely created with our selfish “Out of Sight and Not in Our Neighborhood” rational.

During the 1870s, the proposed site became part of the Waimanalo Sugar Plantation and in 1917 part of the new 1,500-acre Military Reservation, later known as Bellows Air Force Station. In 1966, 74.76 acres that also comprise the proposed 9-acre project site were transferred from the military to the State of Hawai`i. Renamed “Waimanalo State Recreation Area,” the state land was managed by the Department of Land and Natural Resources (DLNR), Division of State Parks. While State Parks implemented outdoor recreational uses for the public along the beach inclusive of camping and picnic areas, the project site along the highway was left alone. After having been abandoned by the military, it had been naturally revegetated with fast-growing non-native, invasive plant species such as haole koa (Leucaena leucocephala), a shrubby, non-native tree, and had subsequently become a hang-out during the 1960s for less-desirable elements of society (not the typical homeless) with the romantic name of Sherwood Forest apparently coined during such period.

In 1992, the Park, inclusive of the proposed “Sherwood” project site, was transferred to the City and County of Honolulu, and the Department of Parks and Recreation became the Park`s manager. Based upon earlier community support as expressed by the Waimanalo Neighborhood Board, the City and County Honolulu proposed it its 2012 Waimanalo Beach Plan Final EA to improve the site with ball fields. When work finally started on the project in the fall of 2019 after funds were appropriated by the City for such work, Hawaiian community activists, caught ‘”by surprise”, were able to shut the project down through large-scale protests to protect their “Sherwood Forest” that also intimidated and largely disenfranchised other members of the community to voice their support for the project or provide possible alternatives at that time.

While the protestors also claimed to protect sensitive environmental resources such as the Hawaiian hoary bat (lasiurus cinereus semotus), they were largely a response to or an upwelling of the many grievances that Native Hawaiians rightfully felt had not been addressed over the years inclusive of the loss of much of their homeland in Waimanalo. Therefore forgotten or not acknowledged by the activists was that “Sherwood Forest” was a graded and heavily disturbed site that had been used by the military for over fifty years. After it was finally abandoned by the military, it had largely been revegetated by nature with fast-growing non-native, invasive plant species such as haole koa (Leucaena leucocephala), a shrubby, non-native tree, and had subsequently become a hang-out during the 1960’s for less desirable elements of society (not the typical homeless) with the romantic name of Sherwood Forest apparently coined during such period.
The Kapuna and low income housing village that will benefit the whole community is therefore proposed as a thoughtful alternative to the proposed ballparks or for leaving the site alone.