On Veterans Day, November 11, 2017, the church bells rang out in Hawaii, similar to the time when Queen Lili’uokalani died 100 years ago on this date. She was remembered during a day-long ALOHA LILI’U, a formal observance of her life and legacy. It included a program in her honor at Hawaii’s Capitol in Honolulu attended by the State’s dignitaries along with 100 Hawaiian conch shell blowers, 100 hula dancers and chanters, along with laying of leis (garland of flowers) at her statue. She was also remembered with plays of her life and her continuing legacy during a special evening ceremony at the Iolani Palace, her royal residence.

A small delegation of alohahawaiionipaa.org supporters returned a few days later to honor the Queen at her statue with leis and to interact with tourists to tell her story.

As head of the ‘Onipa‘a  (meaning “immovable,” “steadfast,” “firm,” “resolute,” “stick together”) movement, whose motto was “Hawaii for the Hawaiians,” Liliuokalani fought strongly against annexation of the Hawaiian islands by the United States.

In memory of her courageous stand against all odds, presented herewith are languages spoken in 14 countries of the world that recognized the Kingdom of Hawaii as an independent nation before Queen Lili’uokalani and her Hawaiian Kingdom were overthrown on January 17, 1893 by American business interests backed by the American military.

While Native Hawaiian interests may be splintered as how to proceed from here with all the indignation and suffering over the years after the loss of their kingdom, assisting with affordable housing and meaningful livelihood jobs is now a top priority. It can and should be a two-way street if everyone is willing to positively cooperate.

Alohahawaiionipaa.org’s proposal of a Hawaiian Cultural/ Housing Center Village in Waikiki is an effective step with a big footprint in the right direction. We are standing by to assist in any way we can.

As proposed, the project would not only serve native Hawaiians but could also be shared as a low/moderate income housing site with employees of the Waikiki tourist industry that daily have to commute long distances to get to work. It could also provide a window of opportunity for the Hawaii Department of Education (DOE) to mitigate its chronic teacher shortage caused by the high cost of housing as a percentage of the units could be set aside for qualified mainland applicants. 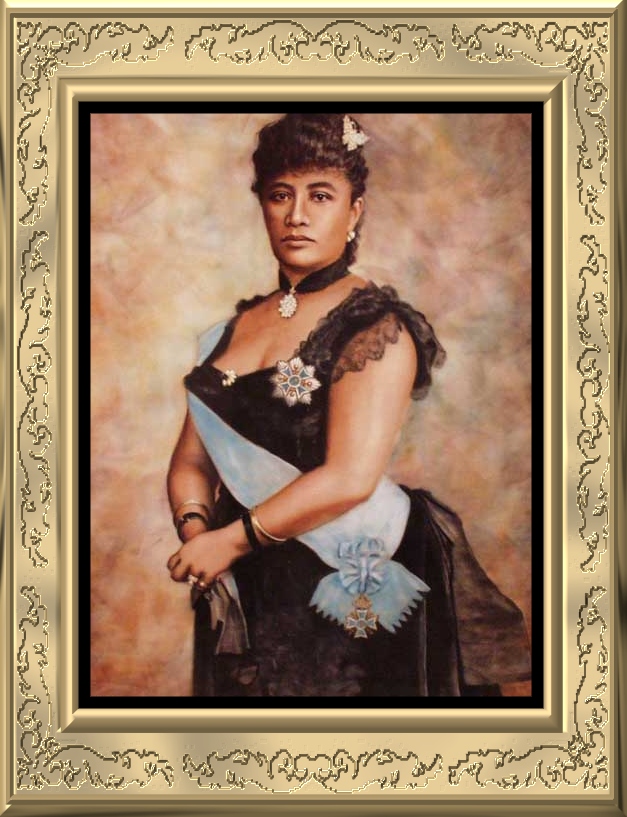 Already after the USA Civil War largely powerful American and also some European businessmen had started to form secret, armed militia in an effort to undermine the Hawaiian Monarchy and protect their business interests and plan for an overthrow if the opportunity would arise. To further protect their interests the businessmen forced the 1887 Bayonet Constitution Hawai`i upon King Kalakaua on threat of being deposed or physically harmed. The 1887 Bayonet Constitution altered eligibility to vote, stipulating property value as another condition of voting eligibility. In addition to native Hawaiians many Asians, such as Japanese and Chinese, who comprised a large proportion of the population and who had previously become naturalized subjects of the Kingdom, were subsequently stripped of their voting rights. This guaranteed a voting monopoly by the moneyed business aristocracy such as wealthy Americans and Europeans who had acquired full voting rights without the need for Hawaiian citizenship. By 1893 Queen Lili`uokalani, with the support of native Hawaiians and disenfranchised naturalized citizens, attempted to install a new constitution and correct these injustices.

On January 17, 1893, treasonous Sanford Dole and his committee of local businessmen, fearing a loss of economic and political power, overthrew the Kingdom of Hawai`i with the help of American Marines outfitted with Gatling guns (machine guns) then the weapon of choice by white-ruled countries to subjugate and colonize), and declared itself the Provisional Government of Hawai`i “to rule until annexation by the United States.” Such overthrow was also made possible with the compliance of the Protestant missionary churches that had sprung up all over Hawai`i since the 1820s. The Queen, wanting to avoid further bloodshed, protested the overthrow to the US government, expecting to be reinstated and justice to prevail:
“I, Lili`uokalani, by the Grace of God and under the Constitution of the Hawaiian Kingdom, Queen, do hereby solemnly protest against any and all acts done against myself and the Constitutional Government of the Hawaiian Kingdom by certain persons claiming to have established a Provisional Government of and for this Kingdom. That I yield to the superior force of the United States of America whose Minister Plenipotentiary, His Excellency John L. Stevens, has caused United States troops to be landed at Honolulu and declared that he would support the Provisional Government. Now to avoid any collision of armed forces, and perhaps the loss of life, I do this under protest and impelled by said force yield my authority until such time as the Government of the United States shall, upon facts being presented to it, undo the action of its representatives and reinstate me in the authority which I claim as the Constitutional Sovereign of the Hawaiian Islands.”

Dole and his co-conspirators lobbied immediately for annexation to the United States of America while members of the Hawaiian Kingdom lobbied to restore it. USA President Grover Cleveland, a Democrat, considered the overthrow to be an illegal act of war. He refused to consider annexation of the islands and initially attempted to restore the Queen to her throne. The largely Republican business elite then proclaimed Hawai`i the Republic of Hawai`i and decided to wait until President Cleveland’s second term was finished to try again for annexation with a new, hopefully Republican president. On January 5, 1895, native Hawaiian freedom fighters attempted a counterrevolution which failed when some of them were gunned down by the vastly superior forces of the white business elite. Queen Lili`uokalani was arrested on treason charges, was placed under permanent house arrest, and was finally forced to abdicate the throne.

When William McKinley, a Republican, became president on March 4, 1887, his party had already undermined the efforts of President Cleveland to restore the Kingdom of Hawai`i as they strongly supported annexation for the sake of strategic military and economic interests under their doctrine of “Manifest Destiny” (policy of imperialistic expansion justified/defended as necessary or benevolent). At McKinley’s request a new treaty of annexation was signed and sent to Congress for approval. In response, the Hawaiian Patriotic League and its female counterpart petitioned Congress, opposing it. In September and October of that year, Hui Aloha`Āina (men) collected 556 pages for a total of 21,269 signatures of native Hawaiians, opposing annexation. Hui Kālai`āina (women) collected another 17,000 signatures for restoring the monarchy. This accounted for most of the adult native Hawaiian population still surviving after being decimated from its original estimated population of 600,000-700,000 after coming in contact with the white man and his diseases in 1778.

While the native Hawaiians were able to defeat McKinley’s annexation treaty in 1897, the U.S. Congress, in 1898, passed the illegal Newlands Resolution and illegally annexed the Kingdom of Hawai`i. The USA desired Pearl Harbor and Hawai`i as a strategic Pacific military base during the Spanish-American War and also for their further territorial expansion in the Pacific. For immediate economic and political control of the Kingdom of Hawai`i, native Hawaiian culture was suppressed and the teaching of the native Hawaiian language was forbidden in school.

On November 23, 1993, President Bill Clinton, a Democrat, and the Congress of the United States of America apologized to native Hawaiians on behalf of its people “for the overthrow of the Kingdom of Hawai`i and the deprivation of the rights of native Hawaiians to self-determination.” 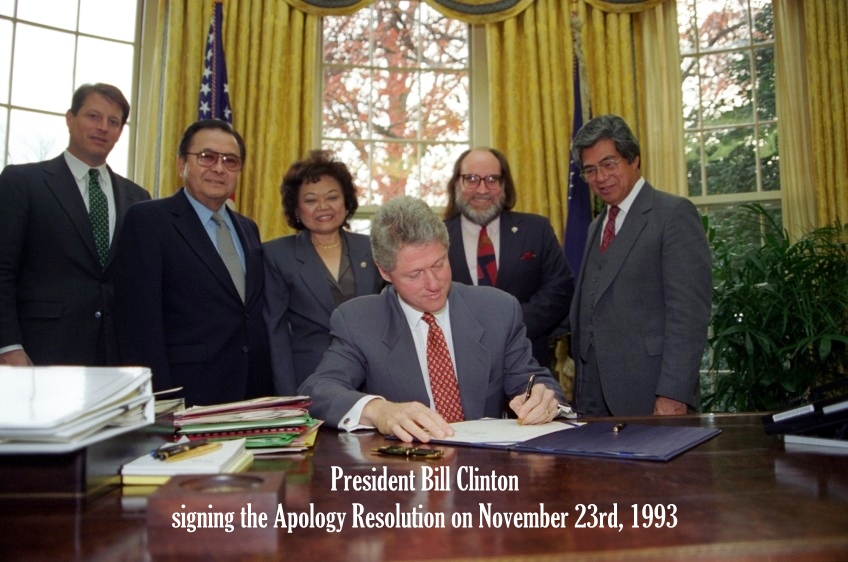 Queen Lili`uokalani was born in Honolulu on September 2, 1838, ascended to the thrown of the Kingdom of Hawai’i after the death of her brother King Kalakaua on January 20, 1891, and was overthrown with the help of the American military on January 17, 1893. She remained Hawaii’s beloved queen in exile in the hearts of her people until her death on November 11, 1917.